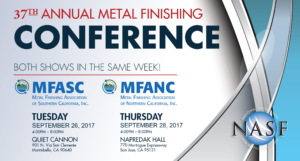 The event aimed to bring metal finishing industry suppliers and key decision makers from metal finishing companies together to network and exchange information on innovative products and services. The conference setup offers a cost-effective way for the industry to reach metal finishing customers and potential customers in one evening.

The conference offered new workshops, networking dinners, and suppliers from both the national and local level.