EEC Environmental staff partnered with Samaritan’s Purse last week in Baton Rouge, Louisiana to rebuild a house from the 2016 flooding, and in Houston, Texas to clean up after hurricane Harvey. 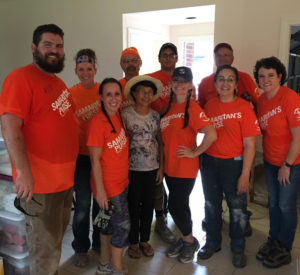 Samaritan’s Purse is a nondenominational evangelical Christian organization that provides “spiritual and physical aid to hurting people around the world.” They have been in operation since 1970 and helps meet the needs of “people who are victims of war, poverty, natural disasters, disease, and famine.”

Typically, homeowners in the affected region are able to apply to Samaritan’s Purse for help in rebuilding efforts. The organization works with local churches to stay at their facility for the duration of time they will be rebuilding in that particular region. Volunteers sign up for one or two week slots, have the option to sign up as day volunteers or overnight volunteers,  and meet up at local churches to receive training and then to the homes.

“I was quite impressed by how organized and efficient SP is in both areas with such little permanent staff,” said Kyle Wagner, Senior Staff Engineer with EEC.

Wagner mentioned that he was able to spend time with volunteers from across the U.S. as well as the homeowners in the affected areas.

There are currently four house-builds taking place through Samaritan’s Purse in Baton Rouge and they are scheduled to keep going until October of next year. The organization continues to try and offer help and support where it is most needed. Click the following link here to learn more about the organization or how to get involved.