From Coast to Coast: EEC’s Offices Exhibit and Attend Conferences on the West and East Coast 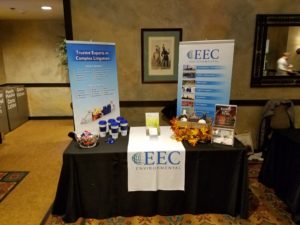 Both EEC’s West coast and East coast offices exhibited at the Environmental Law Conference at Yosemite for the 7th Year and attended the 25th ABA Fall Conference in Baltimore during the third week of October.

The State Bar of California’s Environmental Law Conference at Yosemite® was held at the Tenaya Lodge in “The Gateway to Yosemite” from Thursday through Sunday, October 19-22, 2017. The conference qualified for 11.25 Hours of MCLE Credit.

The 26th Annual Environmental Law Conference is nationally recognized as the largest and most prestigious gathering in California of leaders in environmental, land use, and natural resources law. The conference gave attendees the opportunity to gather the nation’s top environmental officials, lawyers, and other professionals in the beautiful setting of Yosemite.

A keynote presentation by David Bernhardt, Deputy Secretary of the U.S. Department of the Interior on Friday kicked off the weekend of discussion panels, speaking sessions, and opportunities for networking.

The ABA Fall Conference gathered together professionals who focus on environmental, energy, and natural resource for a premier forum for dialogue and deliberation of current and emerging issues. The four-day conference offered a cutting-edge CLE program, opportunities for networking, plenary sessions, and breakout sessions for the discussion of emerging topics such as the legal landscape of public land management, and the practical insights on food law that impacts environmental law.

Other topics included the status of the Chevron and Auer doctrines and their potential replacements; recent decisions and upcoming cases—how actions by the U.S. Supreme Court might impact one’s practice, and how cities are effectively implementing resilient and sustainable initiatives.

EEC’s experiences providing a broad spectrum of litigation support provided the opportunity for members of the organization’s staff to network with other environmental professionals and strengthened the organization’s ability to provide a reliable scientific basis for overcoming or minimizing contentious issues.

Click the following link here to view some of the photos taken during the Environmental Law Conference at Yosemite.